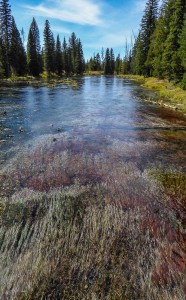 “it was a beautiful moonlit night, August 17, 1959, when one of the most powerful earthquakes ever recorded in the Rocky Mountains struck the Madison River Canyon.”

We drove to the Earthquake Lake Visitor Center, not far from West Yellowstone, to learn about the earthquake, see the landslide from the Vista Room and take a short walk to the Memorial Boulder and upper overlook. The earthquake, which measured 7.5 on the Richter scale, triggered a massive landslide, which sent over 80 million tons of rock crashing down into the canyon, blocking the Madison River. The water backed up behind the slide, forming the new Earthquake Lake. At the overlook we had a panoramic view of the lake and ghost trees. It was a Night of Terror for campers at Rock Creek Campground, when it started flooding and was completely under water the following morning. Three sections of HWY 287 fell into the lake, and as a result of the night’s disaster, hundreds of people vacationing in the area were trapped. A total of 28 lives were lost. Today, this tranquil setting is misleading – geologic tensions are still active underground. In 1960, 37,800 acres were federally designated to interpret the 1959 Hebgen Lake Earthquake. Click on thumbnail to view images 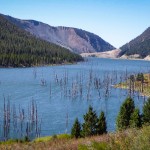 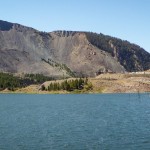 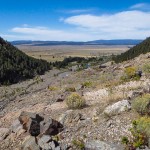 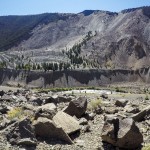 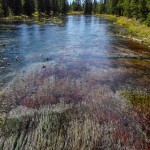 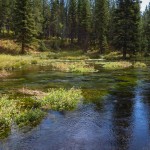 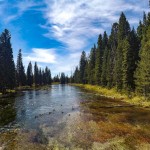 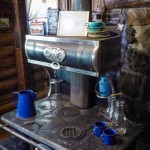 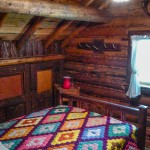 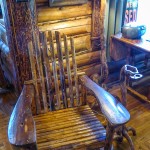 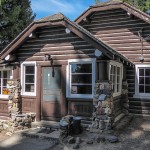 On the way back to West Yellowstone we visited the Johnny Sack Cabin in Big Springs Idaho. The cabin took approximately three years to complete, as Johnny worked primarily with hand tools — saws, draw knives, scrapers and planers. Johnny built a small structure and water-wheel at the edge of the springs to harness the power of the springs and create electricity. in Big Springs Idaho. In 1929, Johnny Sack leased a small tract of land from the United States Forest Service and began building his log cabin at Big Springs. Little did Johnny know when he first acquired the choice building site, his home would become a landmark one day discussed in the United States Congress.

One of Johnny’s trademarks is the split bark decoration used in the cabin’s furniture and interior. He was a German cabinet maker who took great pride in detail work. One ceiling lamp, still hanging in its original location, contains seventy-two individual handcrafted pieces of wood. A double bed was made of ninety-six wood pieces which Johnny nailed and glued together. The cabin took approximately three years to complete, as Johnny worked primarily with hand tools — saws, draw knives, scrapers and planers. Johnny built a small structure and water-wheel at the edge of the springs to harness the power of the springs and create electricity.