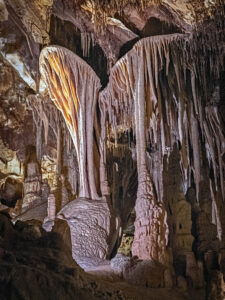 Great Basin National Park was established in October 27, 1986, and encompasses 77,180 acres. The park derives its name from the Great Basin, the dry and mountainous region between the Sierra Nevada and the Wasatch Mountains. The park rises from a sea of sagebrush to treeless rocky summits. It is notable for its grove of ancient bristlecone pines, the oldest known nonclonal organisms, and for the Lehman Caves at the base of 13,063-foot Wheeler Peak, as well as Wheeler Glacier. It is an hour drive from Ely to the Park, we visited the Visitor Center and bought tickets on line for the Lehman Caves then followed the scenic drive to the Mather Overlook for a view of Wheeler Peak. The Wheeler Peak Scenic Drive is a paved 12 mile out and back road to an elevation exceeding 10,000 feet, to the face of Wheeler Peak. Due to snow on the road, it was closed after the viewpoint, but we enjoyed magnificent views of Wheeler Peak before descending back to Ely. Click on thumbnail to view image 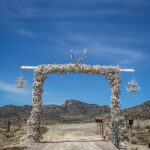 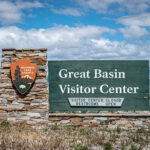 View from the Visitor Center 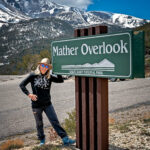 On the Wheeler Peak Scenic Drive at 9,000 feet 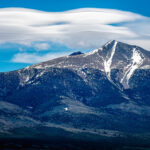 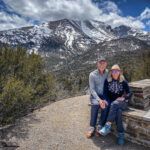 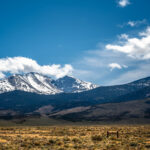 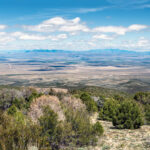 Sea of sagebrush in the desertAmazing scenery 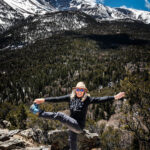 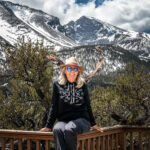 The next day we went back to Great Basin National Park to take the tour of the Lehman Caves, which may only be entered with a ranger-led tour. We signed up for the 60 minute Parachute Shield Tour, which visits the Lodge Room, Inscription Room and the Grand Palace. A beautifully decorated geologic wonder, Lehman Caves is a single cavern that weaves two miles into the eastern base of the Snake Range. First discovered in the late 1800s by Absalom Lehman, early visitors explored the cave by candlelight, scrambling over rough rocks and squeezing through tight spaces. The Lehman Caves system began forming around 550 million years ago, while it was still submerged in a relatively warm, shallow ocean. The caves are made up of mostly a marble and limestone solution, that forms the many cave decorations throughout the cavern.

After entering the cave through the man-made entrance, our group of 16 continued deeper into the cave, when the Ranger stopped and asked, “Is everyone ok if I turn out the lights?” We all wanted to have the unique experience of absolute darkness that can only be had in the depths of a cave. Our group held a collective breath as the lights dimmed and the silence and the eerily-pure darkness settled upon us. For seconds, that seemed like minutes, we were in absolute darkness, completely without the sense of sight. It was truly an eerie experience for all of us. We saw interesting formations called “soda straws” stalactites hanging from the ceiling as we walked further into the cave. Then we ascended a few stairs and entered the final room of our tour, the Lodge Room, and were amazed by the famous Parachute Shield formation, one of the highly photographed cave shields in Lehman Caves. It is estimated that Lehman Caves contains over 500 cave shields, or large round speleothems. Lehman Caves is a hidden gem in Nevada’s Great Basin National Park and is well worth the effort to take the time to explore it. Click on thumbnail to view image 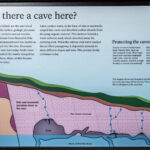 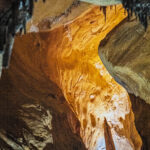 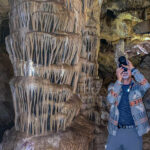 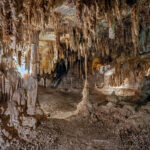 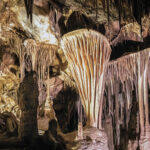 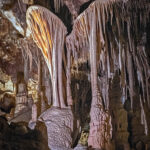 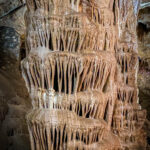 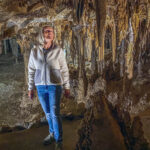 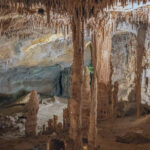