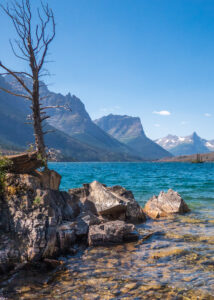 We came back to Glacier National Park for another 3 week stay at Columbia Falls RV Park in late August and September. We took another drive out to Polebridge for the day to hike along Bowman Lake. It is approximately one mile wide and eight miles in length. We stopped at Polebridge to buy the famous bear claws again to take on the hike to the backpacking campsite where we went down to the lake just before the campsite and set up our camping chairs. Bowman Lake is a very peaceful lake and a perfect place to chill out and swim in the lake while enjoying the tranquility of the surroundings. Click on thumbnail to view images 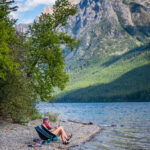 Relaxing on the beach at Bowman Lake 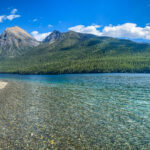 Pano of Bowman Lake and the beach 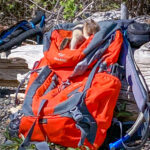 This pesky chipmunk was determined to find found in our backpack 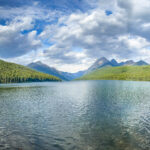 View looking down the lake

On our anniversary, August 21st, we bought tickets to the Theater in Bigfork to see the show Newsies. Only 30 minutes south of Columbia Falls, Bigfork is a fork where two rivers, the Flathead River and the Swan River flow into the Flathead Lake. The town is home to a 27-hole golf course, art galleries, and live theater. Bigfork Summer Playhouse offers Broadway-caliber productions every summer, and we were lucky to get two tickets to the Newsies. We ate dinner at the Bigfork Inn sitting outside on the deck with views looking down main street. The show was fabulous and we will definitely try to come back for another performance another summer. Click on thumbnail to view images 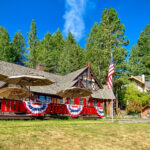 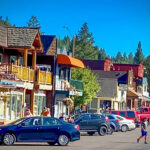 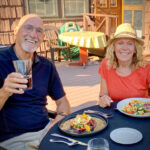 Dinner before the show 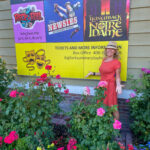 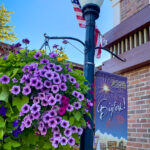 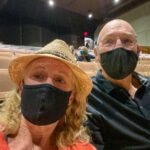 We wore masks during the entire show 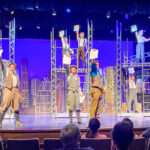 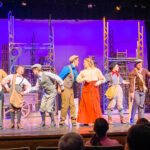 Saint Mary Lake is the second-largest lake in Glacier National Park and one of the most photographed locations along the Going-to-the-Sun Road. At an altitude of 4,484 feet the waters are colder and 1,500 feet higher in altitude than Lake McDonald. We drove the Going-to-the-Sun Road to the east side of the Park to the closure, due to COVID-19 the East side of the Park is still closed. We turned back and stopped at the Wild Goose Island Viewpoint at St Mary Lake. The viewpoint offers splendid, panoramic views of the magnificent peaks encircling Saint Mary Lake with Wild Goose Island being the centerpiece. What a spectacular view of Gunsight Mountain (9,258′) and Fusillade Mountain at the far end of the lake. It was a beautiful sunny day so we hiked down to the lake shore to explore the rocky beach and see the crystal clear water. The views across the lake with the small Goose Island in the center surrounded by mountains was inspiring. The lake is 10 miles long and 300 feet deep with a surface area of 3,923 acres. There is a Montana Legend about Wild Goose Island and how it was named.

Many moons ago now, there were two tribes living on either side of the lake who avoided dealings one with the other. One day a handsome warrior on the near shore saw a lovely maiden from the other tribe swimming to the island, and was instantly smitten. He swam out and they met on the shore of the little islet. They became betrothed after talking for hours and promised each other to meet on the island on the morrow. Neither tribe was happy about their meeting. So the man and the maiden in the wee hours of the morning swam out to the little island to meet and flee to a new land where they might marry. But the Great Spirit was watching and took pity on the lovers. He transformed them into geese, which mate for life, so they could fly away from their pursuers and always be together. From that day to this the little island at the center of St Mary Lake has been known as Wild Goose Island.. 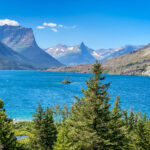 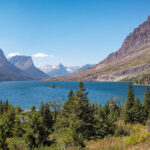 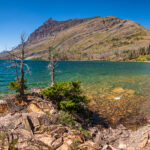 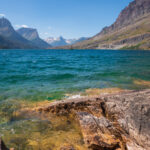 Gunsight Mountain in the distance 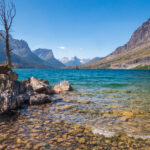 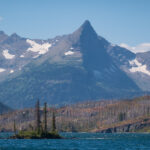 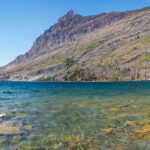 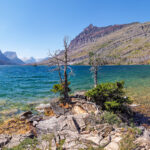 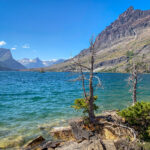 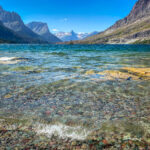 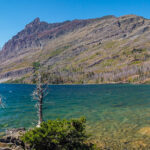 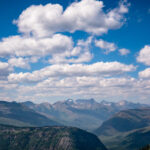 Another day we drove out to the small town of Essex 26 miles southeast of West Glacier not inside the Park. Named for a county in England, Essex (originally known as Walton) began as a small town on the Great Northern Railway’s main line. We went there to visit the Izaak Walton Inn, a historic inn, originally built as the Izaak Walton Hotel in 1939 by the Great Northern Railway as a soup kitchen and lodgings for the railway workers. Today, the Inn is served by Essex station, the only request stop on the Amtrak’s Empire Builder route. The Tudor Revival inn is named after Sir Izaak Walton, the English writer and fisherman. The inn has 33 rooms for rent within the inn itself, as well as refurbished cabooses on the grounds and is open year-round except for some weeks during the off season.

Track facing side of the Izaak Walton Inn

The lobby inside the inn

Enjoying beer and a snack in the Izaak Walton Inn

A refurbished caboose to stay in