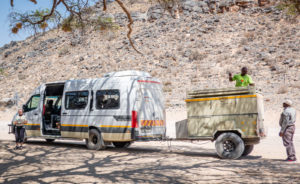 We began our 3 week Trans African Safari on September 17th in Windhoek, Namibia. We gathered together in the Terra Africa Guesthouse. At the Guesthouse we met Pat and Dan Bowen from Wisconsin; Joe and Carolyn Harley from Calgary; and four Australians: Steve and Toni Pearce from Newcastle; and Keith and Paulette from Melbourne. Along with Pat and Harry Koehler from Calgary and us makes twelve in our group. Our guide was Thulani from Zimbabwe, and our driver was Thamu.

We spent 3 weeks exploring Namibia, Botswana and Zimbabwe, experiencing the wildlife, culture and scenery only Africa can deliver. From marveling at the Victoria Falls to the breathtaking magnitude of Namibia’s dunes and big game interaction – this tour combined all the comforts of lodge accommodation with an unforgettable safari experience.

Traveling through Namibia our first stop was the Namib Naukluft National Park. The park contains what is considered to be the oldest desert in the world. We visited the world’s highest sand dunes at Sossusvlei and the dead trees Deadvlei. These dunes, which can reach heights of over 300 m, are absolutely spectacular and provide for a fantastic photo opportunity. We also stopped to view the Sesriem Canyon, which was carved millions of years ago by the Tsauchab River. We then drove through the Namib Naukluft National Park on our way to Swakopmund.

After leaving the port town of Swakopmund we enter the Etosha National Park via the Andersson gate, named after Karl Johan Andersson, one of the first European explorers to come across the Etosha pan, which means “Great White Place” in the Ndonga dialect of the Ovambo tribe.  Etosha was declared a National Park in 1907 and it is home to approx. 114 mammal species, 340 bird species, 110 reptile species, 16 amphibian species and, surprisingly, one species of fish.

From Etosha we drove into Bushmanland and had a guided visit in the Living Museum of the Ju’Hoansi-San, a local Bushmen community. We then travelled eastwards into the western Caprivi region. We enjoyed a morning game drive in the Greater Bwabwata National Park, which extends from the Kavango River in the west to the Kwando River in the east and incorporates the Mahangu Game Reserve. We then left  Caprivi and travelled south to Maun, the gateway to the Okavango Delta and Moremi Game Reserve. The name Maun is derived from the San word “maung”, which means “the place of short reeds”. There we took a 45 minute scenic flight over the Okavango Delta.

The next day we took a boat trip in the traditional dug-out canoes through the thick vegetation of the Okavango Delta discovering a variety of birds and wildlife. Unlike other deltas, it flows into the Kalahari Desert without ever reaching the coast. We then made our way to our Bedouin Bush Camp, which is situated in the Greater Moremi region where we did a night game drive. We spent the next day exploring the Moremi Game Reserve and the waterholes where the game congregate during the dry season. Next day we left the bush behind and travelled east towards the Makgadikgadi Pans, once a large river fed lake, however, the pans are now saline and empty.

Then we headed north to Kasane, the gateway to the Chobe National Park. Chobe, which is the second largest national park in Botswana and covers 10,566 square km, has one of the greatest concentrations of elephants found on the African continent. Then it was off to see the wildlife of the Chobe National Park on a morning game drive and finished off with a sunset cruise on the Chobe River.

We made our way across the border into Zimbabwe and onto Hwange National Park where we spent the next two nights. Hwange National Park is one of Africa’s finest havens for wildlife and is home to vast herds of elephant, buffalo, and zebra and has a very large concentration of giraffe. From there we continued northwards to Victoria Falls, one of the Seven Natural Wonders of the World, where we explored the many wonders of this enchanted place.