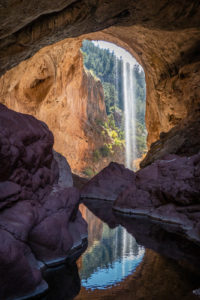 While we were in Phoenix, AZ, for the month of November we took several side trips exploring the area. We drove scenic route 89 from Wickenburg to Prescott, along a beautiful winding road with great views of the mountains and valleys as we climbed higher in elevation. Prescott is at 5,367ft and it was much colder than Phoenix. We went shopping on Whiskey Row for warmer clothes. The main street was originally known for the establishment of many saloons, gambling parlors, opium dens, and houses of prostitution. The town-site of Prescott was officially founded in 1864, as the Territorial Capital of Arizona. Many of the old wooden buildings on Whiskey Row were destroyed in “The Great Fire” of July, 1900, and replaced with more permanent concrete, brick, and stone buildings which are still intact today and give the town a very old-western appeal. While  shopping we were told to visit the Superstition Meadery, founded in 2012. Needless to say neither of us had tried Mead before so we were ready to sample it. Their mission at the Meadery is “To Reintroduce the World’s Oldest Fermented Beverage to Mankind”, and we wanted to sample the range of craft beverages, many of which are the top rated in the world. Oak barrel aging is the secret to many of the products they make at Superstition Meadery. The flight of Mead and Cider we tasted was excellent and we even bought a bottle to go. We stayed the night at the historic Hassayampa Inn, opened in 1927, with on-site bar and restaurant and very stylish rooms. We went for dinner at the El Gato Azul, a friendly, quirky little restaurant in walking distance from the Inn. END_OF_DOCUMENT_TOKEN_TO_BE_REPLACED 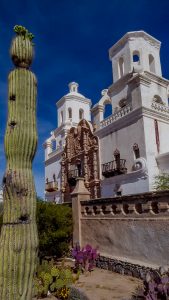 We finally left San Diego and heading east to Tucson to have service done on R SHRPA. We are staying at the Voyager RV Resort until everything is finished. We dropped off the coach at Freedom RV Service center early Thursday, April 21st, and drove out to the Mission San Xavier, to explore this National Historic Landmark, founded by Fr. Kino, the Jesuit pioneer and explorer, in 1692. This Franciscan church is still a working church, built between 1783 to 1797. The church is so well preserved that when you enter the church it is like walking into the 18th century. Statues dating to the 1750’s, vivid late baroque altars, and original paintings adorn the interior. In 1783, the Franciscans borrowed 7,000 pesos to begin the church, and from 1790 to 1815, artists from central New Spain worked to complete the interior, earning double pay because of the threat of Apaches in the area, but in 1797 funds ran out. The church was left incomplete to this day, the east tower was left with no dome or lantern, the choir loft and baptistery paintings were left unfinished. We took a very interesting tour throughout the church and discovered all the things that were left undone when the money ran out. Click on thumbnail to view images END_OF_DOCUMENT_TOKEN_TO_BE_REPLACED