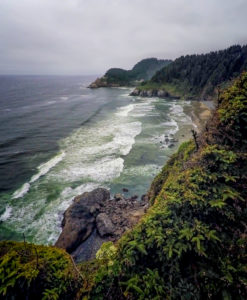 We finally left San Diego on June 15th heading north to the Oregon Coast where we had booked into the Sea Perch RV Resort for two nights, located near Yachats, We explored the beaches near the Park, first drove to get a beautiful view of Heceta Beach at the viewpoint looking across to the Heceta Lighthouse. After enjoying a fabulous late lunch at the Yachats Brewing + Farmstore we drove to Cape Perpetua Scenic Area and took the short hike to see the Devil’s Churn, Thor’s Well and Spouting Horn. We were there near high tide around 5:00 and we watched the turbulent ocean waves crashing through small cracks in the rocky shore, spraying straight up into the air. The next day we drove north toward Newport and stopped at the Seal Rock State Recreation Site. We hiked down through the Seal Rock State Wayside, and saw views of large off-shore rock formations that provide habitat for seals. sea lions, and other marine life. The beach has interesting tide pools as well as excellent ocean views and a sandy beach which we walked the entire length, enjoying the ocean breeze and the beautiful views. As we drove back to Yachats we pulled off the road to see these huge amazing wood carvings. It is the Brian McEneny Woodcarving Gallery and has one of the largest displays of refined chainsaw sculpture and tables on the Oregon Coast. Click on thumbnail to view images END_OF_DOCUMENT_TOKEN_TO_BE_REPLACED

May 26th, Monday, we left Trinidad to drive north along the Oregon Coast. The South Coast is mountainous and much of the coastline is made up of sea cliffs and miles of beaches. We drove along Hwy 101 which is known for its scenic overlooks of the Pacific Ocean and from the window of our coach we had a panoramic view of the coastline. We passed through Coos Bay, it is the largest city on the Oregon Coast with a population of 16,000. North of Coos Bay we saw the Oregon Dunes National Recreation Area with several all-terrain vehicles riding the dunes. Driving along Hwy 101 we entered the city of Florence crossing over the Siuslaw River Bridge. It is a bascule bridge, the total length is 1,568 feet, it opened in 1936 and was added to the National Register of Historical Places in 2005. Six hours after leaving Trinidad we were almost to our destination when we drove right past it on the winding narrow coastal highway without a place to turn around we kept going to Yachats, not too far up the highway. We turned around, not something Bob is thrilled about doing, and headed south again to the Sea Perch RV Resort, located on the shores of the Pacific Ocean. We have to learn never to trust the GPS coordinates, we have been fooled a few times. END_OF_DOCUMENT_TOKEN_TO_BE_REPLACED