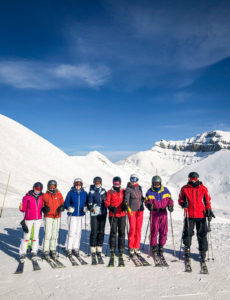 On March 7th, 2020, we flew to Calgary, Alberta, where we met up with the Chagrin Valley Ski Club for a week of skiing in Banff. Founded in 1883 near a proposed Canadian Pacific Railway tunnel site, the first town, 3 km from present-day Banff, was know as “Siding 29”. The town of Banff is located within the Rocky Mountains mountain range, at 4,639ft above sea level, within Banff National Park. The town is built around Tunnel Mountain, We stayed at the Banff Ptarmigan Inn in downtown Banff. with a great view of Tunnel Mountain. Bob was not able to snowboard on this trip so I went with the girls to ski at Banff Sunshine Village, located on the Continental Divide of the Canadian Rockies within Banff National Park in Alberta and Mt Assiniboine Provincial Park in British Columbia. We took the free Mountain Tour and were able to see the whole area with our guide. It was a beautiful blue bird day and the views of the Rockies was impressive as well as the skiing. The next day we skied at The Lake Louise Ski Resort, it is one of the largest and most scenic ski resorts in North America. The resort is situated on the southern slopes of the Slate Range, between the heights of Mount Richardson, Ptarmigan Peak, Pika Peak and Redoubt Mountain, all around 10,000ft above sea level. Lake Louise has been a home to skiing since the 1920s, the first lift was constructed in 1954, and a poma was added in 1960. It is a beautiful mountain to ski and we took the free Mountain Tour again and were able to ski most of the area. END_OF_DOCUMENT_TOKEN_TO_BE_REPLACED