Today, Nov 21st, we went to explore the Kartchner Caverns State Park in Benson, AZ. We left early to drive about 50 miles south from Tucson, and arrived at the Caverns to take our first tour. These caves formed over 200,000 yrs ago, were unknown to humankind until 1974 when Gary Tenen and Randy Tufts found a sinkhole on private land, and followed the source of warm moist air, toward what ended up being more than 2.5 miles of pristine cave passages. They wanted to protect the cave from vandalism and kept it a secret for 14 years. After gaining cooperation with the Kartchner family, who owned the property, working with them for ten years, they decided the best way to achieve their goal was to approach the Arizona State Parks. Finally in 1988 the landowners sold the area to the state for the development of the park and show cavern. The state spent $28 million to preserve the caves and they have done an amazing job. 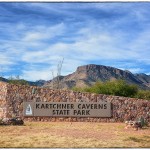 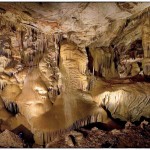 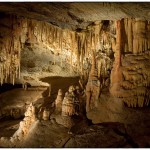 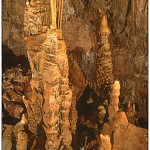 Kubla Khan in the Throne Room 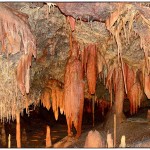 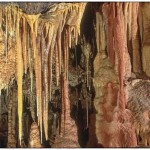 This is the first “live” limestone caves we have ever visited and it was a wonderful experience, we toured both the Big Room Cave and the Throne Room Cave for about 1 1/2 hours for each tour. The Big Room Cave is closed during the summer because it is a nursery roost for 1000 bat caves, and the Throne Room Cave contains one of the world’s largest 21-foot soda straw stalactites and a 58-foot high column called Kubla Khan. During the tours we experienced a fascinating underground landscape, including stalactites dripping down like icicles and giant stalagmites reaching up from the ground forming huge columns when they met. Photohraphy is not permitted in the caves so the images in the slide show are courtesy of the internet.

Take a video tour of the caves