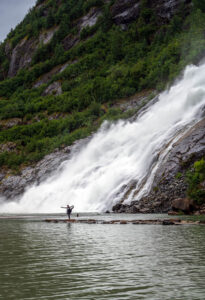 On Tuesday, August 10th we boarded the ferry in Skagway and went to Juneau to continue our journey north. Juneau is the capital city of the state of Alaska, and is named after a gold prospector from Quebec, Joe Juneau. Juneau is unique in that there are no roads connecting the city to the rest of the state nor North America. The absence of a road network is due to the extremely rugged terrain surrounding the city. Juneau sits at sea level, below steep mountains about 3,00 to 4,000 feet high. Atop these mountains is the Juneau Glacier on Mount Juneau, a large ice mass from which about 30 glaciers flow; one of these is the Mendenhall Glacier. We stayed in a Best Western outside of the city and it was a long taxi ride to get into downtown. The next day we went into town and took a bus to see the Mendenhall Glacier about 12 miles from downtown Juneau. . Click on thumbnail to view images 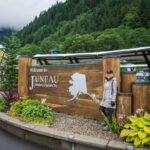 We had two days in Juneau 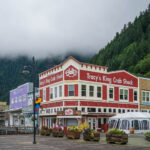 Mural of raven, Tlinglit and bear in downtown 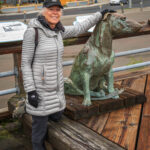 Patsy Ann, she was dubbed the official “Greeter of Juneau, Alaska” in 1934, she always knew whwn a ship was arriving and would be there to greet it. 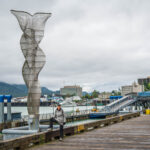 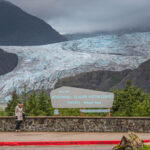 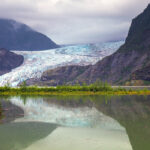 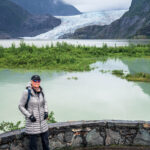 View at the end of Photo point Trail 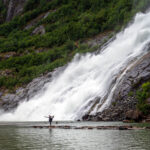 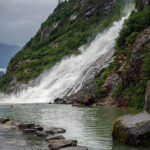 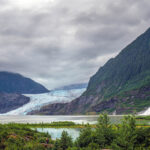 Pano of the glacier and Nugget Falls 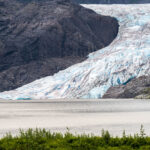 Closer view of the glacier 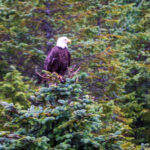 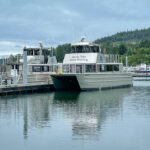 We went on a Whale Watching Tour after seeing the glacier 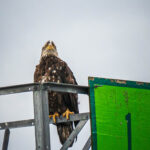 We saw lots of eagles from the boat 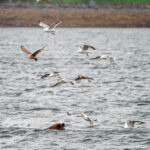 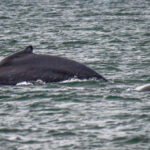 We saw lots of Humpback whales 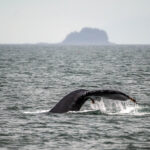 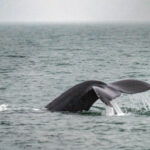 The bus dropped us off at the Mendenhall Glacier Visitor Center, from which we could explore the area. The Mendenhall Glacier is 13.6 miles long, and it has receded 1.75 miles since 1929 when the Mendenhall Lake was created. We walked along the Photo Point Trail to get some closer photos of the glacier and to get closer to the Nugget Falls. The trail to Nugget Falls was mostly under water so not many tourists wanted to go to the end where there used to be a sandbar. After the tour we went to lunch in Juneau at Deckhand Dave’s Fish Tacos, where we sat outside in the cold but had the best fish tacos and beer. Then we went whale watching with Alaska Tales Whale Watching  and saw lots of Humpback whales. Most of them were too far away to get good shots but we did get to see them fluking, lifting their fluke (tail) out of the water before diving. We had two very wet, cold days in Juneau and we were glad to leave the next day and fly to Anchorage for our next stop.