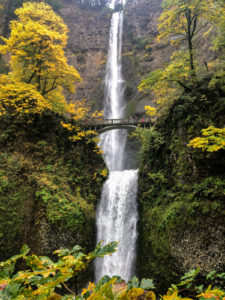 After leaving Bellingham on October 18th, we stopped in Portland, Oregon, where we stayed at the Columbia River RV Park situated on the Columbia River. We had not stopped in Portland before and wanted to explore the area. We visited Multnomah Falls at the Columbia River Gorge National Scenic Area, it is the tallest waterfall in Oregon at 620 ft. in height. It was a rainy day as we left to drive to the falls, but it cleared up as we arrived to view the impressive two tiers of waterfalls cascading over basalt cliffs. Some interesting history about the waterfall; it formed around 15,000 years ago at the end of a hanging valley, and was created by the Missoula Floods. The name comes from the Multnomah tribe, and according to legend, the waterfall was formed after a young woman sacrificed herself to the Great Spirit to save Multnomah village from a plague by jumping from the cliff, and the Multnomah people were saved. After her death, water began to flow from above the cliff, creating the waterfall. If you can believe legends from long ago! The waterfalls were even noted in the journals of Lewis and Clark during their expedition down the Columbia River Gorge in October, 1805.

We hiked up the pathway to the viewing platform to get an unobstructed view of the two tiers cascading down the cliffs under the viewing bridge. The foot bridge was built in 1915, financed by Simon Benson, a Portland financier, and is named the Benson Footbridge, spanning the lower falls at a height of 105 feet. The bridge was originally a timber truss bridge built by the Oregon Railway and Navigation Co. in 1888 to allow trains to stop for the passengers to be able to view the falls from the train, the bridge was dismantled in 1899. We continued hiking up to the observation platform above the Upper falls. Great views overlooking the Upper falls of the powerful surge of water cascading over the cliff. Then we hiked back down to the Multnomah Falls Lodge, completed in 1925, to get a snack and water before heading back to the RV Park. Click on thumbnail to view images 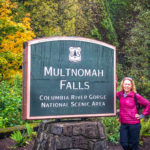 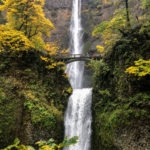 Full view of both tiers of the falls 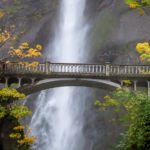 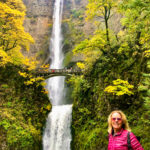 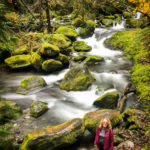 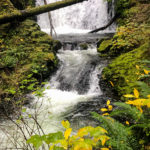 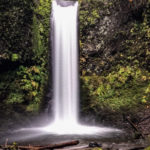 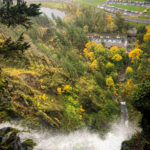 Powerful water flowing cascading over the cliffs from the observation deck 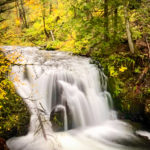 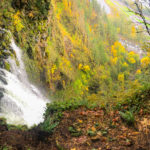 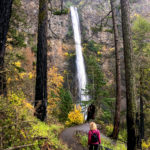