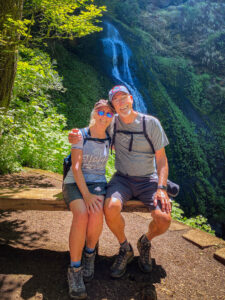 Today, June 16, we visited Silver Falls State Park, located 20 miles east-southeast of Salem and 1 1/2 hour drive from Eugene. The Park is the crown jewel of the Oregon State Parks system, being both Oregon’s largest State Park and boasting one of America’s most impressive waterfall day-hikes, the Trail of Ten Falls, a 7.8 mile loop trail that runs along the banks of Silver Creek and passes by 10 waterfalls. Four of the ten falls have an  amphitheater-like surrounding that allows the trail to pass behind the flow of the falls. We started this hike going in a counterclockwise direction from the Silver Falls Lodge along the rim of the canyon. We entered  a magnificent cathedral-like old-growth forest of towering Douglas firs and hemlocks on a beautiful maintained trail. The first waterfall we came to was the Upper North Falls, 65 feet tall, cascading off a basalt cliff formed by ancient lava flows. We’ve got nine more to go, so we continued along the trail descending a lot of stairs to view the North Falls. At 136 feet tall it is one of the tallest falls in the park, and the huge grotto behind the falls was amazing to walk under. Another mile down the trail we came to a side view of the 31-foot  Twin Falls. Then we took another side trail to view the 134-foot Winter Falls which had a good flow of water still. We stopped on a bench to capture our photo in front of the falls. Returning to the main loop, we headed down the Canyon Trail to pass near the top of Middle North Falls and down the side trail that goes behind the 106-foot high falls and further along the slope to an overhang to get a dramatic view looking back at Middle North Fork Falls framed by mossy maples. So far of all the falls we have seen, this one is our favorite because the cascading water is so close to the trail when you walk behind it. The next waterfall we saw was the view from the wooden platform of the single 27-foot drop Drake Falls, named after the man  who helped make this place a State Park. We took the side trail to view the two-tiered Double Falls, the tallest waterfall in the park at 178 feet. END_OF_DOCUMENT_TOKEN_TO_BE_REPLACED