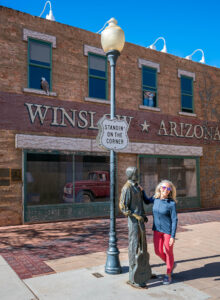 “Standing on the corner in Winslow Arizona” . Winslow achieved national fame in 1972 in the Eagles/Jackson Browne song “Take it Easy” which has this famous line in it. We walked down the Main Street and stopped at La Posada Hotel for lunch but the dining room was closed. The last Harvey House (La Posada Hotel) opened in 1930, and closed in 1957 and was used by the Santa Fe Railway for offices. The railroad abandoned La Posada in 1994 and it was to be torn down. It was bought and restored by Allan Affeldt and it serves as a hotel. La Posada Hotel, “the Resting Place” was considered the finest building in the Southwest. We ate lunch at the RelicRoad Brewing Company and sat on the sidewalk watching the tourists go by. Click on thumbnail to view image END_OF_DOCUMENT_TOKEN_TO_BE_REPLACED