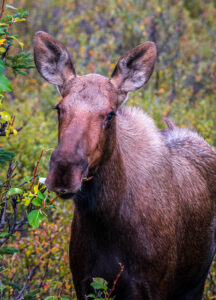 On August 24th, we boarded the train for Denali National Park from Anchorage. The Alaska Railroad and Denali National Park have been intrinsically linked for nearly 50 years, the park served solely by rail. The Parks Highway opened in 1971 making the place accessible by car. The Park was served by rail 50 years longer than by road, and thus we wanted to be a part of the grand history of Alaska’s most famous national park and go by train. The railroad’s flagship Denali Star train runs the scenic 234-mile route, (7 1/2 hours) from Anchorage to Denali Park. We settled into comfortable seats in the GoldStar Dome car and if it was a clear day we would get glimpses of Denali just 30 minutes into the trip, however, our view was cloud covered so we enjoyed different views as we passed through Wasilla and north into the Matanuska-Susitna Valley. We walked through the cars and stopped in at the Wilderness Cafe car for a snack and drink. After reaching Broad Pass, which marks both the highest point on the Alaska Railroad and the lowest pass in the Alaska Range, the train winds through a wide taiga plateau before pulling into Denali Depot. We departed the train and boarded the bus to take us to the Denali Bluffs Hotel, where we are staying for 3 days. We had beautiful vistas of the Denali Canyon and the Alaska Range from the hotel,  located next to Denali National Park on the slopes of Sugarloaf Mountain. Click on thumbnail to view image END_OF_DOCUMENT_TOKEN_TO_BE_REPLACED