With our RV still safely based in its Florida repair facility, we loaded up the Beast and headed out to explore Michigans lower Peninsula.  Our first stop was Fennville and the quaint old Kingsley House B&B built in 1886. What a beautiful old home…a must see. After checking in we headed out, in a light drizzle, to explore the Saugatuck Dunes State Park on the eastern shoreline of Lake Michigan also known as the “Art Coast”.  Miles of trails and expansive views of the lake. 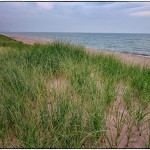 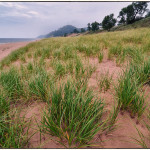 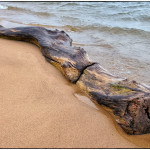 After our walk we headed for the sister cities of Douglas and Saugatuck situated around Lake Kalamazoo.  Saugatuck is a marina town full of boutique shops, restaurants and art galleries.  It was alive with activity and things to see and do. After spending a few wonderful hours exploring we headed over to Douglas for a gourmet vegan dinner at the “Everyday People Cafe”. 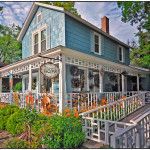 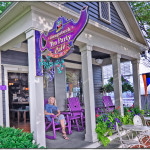 Chef Sue, the Inn Keeper, cooked the best vegan breakfast, especially the blueberry muffins, oozing with blueberries. Fully satiated we headed north toward Traverse City. Our first stop was Holland State Park to view one of Michigan’s most photographed lighthouses, “Big Red”, standing majestically at the entrance to Holland Harbor.  One of the state’s most popular Lake Michigan beaches is in Holland State Park, and at this early hour of the day it was already full of sun worshippers.

We kept heading north to P.J. Hoffmaster State Park to see the dunes along the Lake Michigan shore. We climbed up to the viewing platform atop the Dune Climb Stairway (the 165-step climb) offering a magnificent vista of the blue lake and the dunes all around. We descended the staircase and walked the half mile trail to Lake Michigan’s evolving shoreline,the largest expanse of freshwater dune shoreline in the world. Where we enjoyed the solitude of the beach and the surrounding marram grasses, spiky grass that plays a key role in binding coastal sand and building sand dunes.

We arrived at Traverse City, nestled on the shores of Grand Traverse Bay, in time for dinner at the Om Cafe. Yes, totally vegan and we stuffed ourselves, especially the cherry cobbler for dessert. So we walked back to the hotel through the city, what a great place to live, full of young, active people. 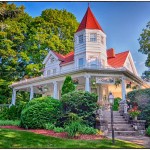 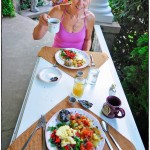 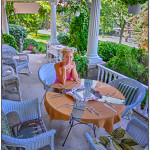 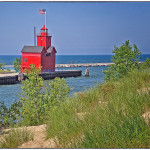 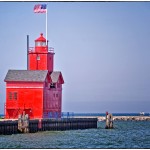 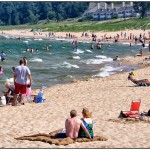 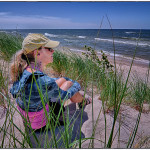