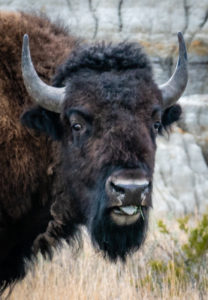 On May 9th we decided to visit Theodore Roosevelt National Park, comprising of three geographically separated areas of Badlands in western North Dakota, and check off another National Park on our map. It was a three hour drive from the Elkhorn RV Park in Spearfish, where we were staying, but we won’t get this close again. The Park, established in 1978, has a South Unit and a smaller North Unit about 80 miles north, we just visited the South Unit near Medora, North Dakota. We stopped at the Visitor Center on I-94 West, where we first got a glimpse of the amazing Painted Canyon and the Badlands. Roosevelt first came to the North Dakota badlands to hunt bison in 1883 and he fell in love with the “perfect freedom” of the West. At his request, ranch managers built a 1 1/2-story cabin complete with a shingled roof and root cellar, the Maltese Cross Cabin, where he lived from 1883-1884 before he was President, later he built the Elkhorn Ranch (we did not have time to visit it) 35 miles north of Medora. In 1901, Theodore Roosevelt became the nation’s 26th President and one of its greatest conservationists.

“I would not have been President had it not been for my experience in North Dakota.”