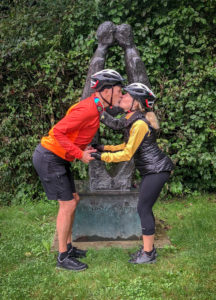 This morning we traveled by train from Cesky Krumlov through the Sumava National Park, the largest national park in Czech Republic to Horni Plana. When we arrived. the bikes were ready for us to start our ride through a beautiful forest, far from traffic and villages, except for the occasional logging truck that takes up the entire path. We entered Stozec where the van was waiting with snacks, water and a shot of Eggnog liqueur. At Nove Udoli we rode our bikes into Germany. This unique border crossing was closed in 1945 and reopened some time ago for pedestrians and bicycles only. At the border we saw a replica of the Iron Curtain that was built after WW II to keep the people living in the Soviet Union, under communist region, from escaping to the west.

Once we crossed into Germany the landscape changed drastically to beautiful manicured fields compared to the poor farming villages of the Czech Republic. Bavaria is among Europe’s most beautiful and serene cycling areas. We rode along a gravel bike path for 7 km, then came to a  Biergarten where we stopped for lunch prepared by the owner-family. We continued on the gravel bike path after we left the Biergarten for 18 km to Waldkirchen, where we were shuttled to the historic Baroque city of Passau, situated at the confluence of three rivers: the Danube, the Inn and the Ilz. We stayed at the Alstadt Hotel overlooking the romantic Danube River, where we had dinner with the VBT group. Click on thumbnail to view image END_OF_DOCUMENT_TOKEN_TO_BE_REPLACED