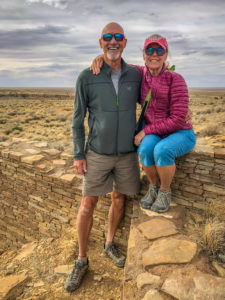 From Albuquerque we drove to Chaco Culture National Historical Park, created in 1907 as Chaco Canyon National Monument, in 1980 became the Culture Center, and in 1987, a World Heritage Site. The Chaco people made this high desert valley the center of their world 1,100 to 1,200 years ago. They began to build here on a grand scale in the mid-800s, and ruins of the great houses of Pueblo Bonito, Una Vida, and Penasco Blanco are still  intact today. We started are tour at the Visitor Center then drove the loop road exploring the magnificent houses of Pueblo Bonito and Chetro Keti. We were fortunate to get on a guided tour of the Pueblo del Arroyo, Spanish for “village by the wash”. We crawled through tunnels and into small dark rooms where they stored the food. After the tour we did the Pueblo Alto Loop Trail hike, 5.4 miles R/T, where we had spectacular overlook views of Pueblo Bonito and Chetro Keti. We explored the sites of Pueblo Alto and New Alto and passed by the Chacoan stairways, the Chacoan “road” system. The roads linked the great houses in the core of Chaco Canyon to far-off communities. Whenever the Chacoan road builders encountered a cliff, stairways  or ramps were constructed to continue to straight road alignments. The panoramic views of the San Juan Basin was breathtaking. Chaco Canyon is well worth the visit as it is one of the most amazing places in the country and one day is not enough time to explore the entire Canyon and Culture. We hope to return and camp for a few nights Click on thumbnail to view images END_OF_DOCUMENT_TOKEN_TO_BE_REPLACED 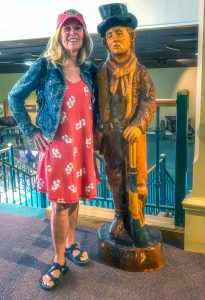 We arrived in Ruidoso, NM on April 25 staying at the Ruidoso Motorcoach Ranch, the only Class A luxury RV resort in New Mexico.There is a lot to see and do here, besides the Ruidoso Downs Race Track, which has been the regions premier attraction since the 1940s. Labor Day attendance to the All American Futurity was nearly 25,000 fans. We weren’t here for the races though, but we did go to the Inn of the Mountain Gods Resort & Casino located in the mountains just above Ruidoso, beside the pristine Lake Mescalero. A wonderful place to come and relax and enjoy a cocktail on the expansive deck looking out on Sierra Blanca Mountain range. We visited the Hubbard Museum of the American West, a Smithsonian Affiliate. The Museum’s 10,000 piece collection includes: wagons, carriages, saddles, firearms, and many Native American artifacts. The life-size horse sculptures outside the Museum is called “Free Spirits at Noisy Water” by Dave Mc Gary, and is a very impressive work of art. The small mountain village of Ruidoso, at 6,920 feet, also has a ski resort called Ski Apache, where we drove to see the vistas and check out the lodge. This was a great stop and we would definitely find our way back here again. Click on thumbnail to view image END_OF_DOCUMENT_TOKEN_TO_BE_REPLACED 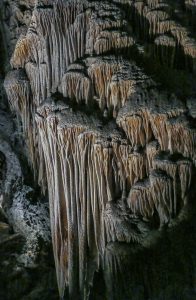 We left Texas today and drove into New Mexico to Carlsbad and stayed at the KOA Campground just north of Carlsbad. Our first time visiting the Carlsbad Cavern National Park and we were very impressed. We were lucky because the elevator wasn’t working so there were not as many tourists going down into the cavern. It is an incomparable realm of gigantic subterranean chambers, fantastic cave formations, and extraordinary features. We did the Natural Entrance Route, a 1.25-mile, self-guided tour that follows the traditional explorer’s route. We entered the cavern through the large historic natural entrance and descended 750 feet into the Earth, following steep and narrow trails through a tall spacious trunk passage called the Main Corridor. As we descended this route we saw the Bat Cave, Devil’s Spring, Green Lake Overlook and the Boneyard, a complex maze of dissolved, Swiss cheese-like limestone rock. We continued on the Big Room Route and passed many large features like the Bottomless Pit, Giant Dome, and Painted Grotto. The 8.2 acre Big Room is a must-see. Then it was time to ascend back up through the Main Corridor and up the switchbacks to the large natural entrance. What an impressive work of nature’s underground beauty, that began around 15-20 million years ago. Click on thumbnail to view image END_OF_DOCUMENT_TOKEN_TO_BE_REPLACED 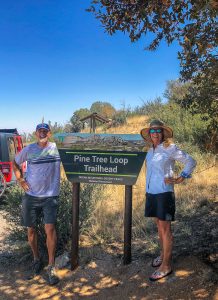 March 23rd, we left Oceanside, CA, to head to new Mexico and Texas for 6 weeks. Our first stop was Tucson, AZ, to get the RV serviced at Freedom for a few days. We decided to stay longer in Tucson at the Voyager RV Resort to play pickle ball and relax. Then on to Las Cruces, New Mexico, stayed at the Hacienda RV and Rally Resort, it is close to Old Town where we explored one day. Our first outing was to see the White Sands National Monument just north of Las Cruces in the northern Chihuahuan Desert. It’s known for its dramatic landscape of great wave-like dunes of gypsum sand that engulf 275 square miles of desert. We stopped to see the White Sands Visitor Center designed in Pueblo Revival style, built during the Great Depression of the 1930’s. We drove along Dunes Drive, a loop road to the Heart of the Sands to hike the Alkali Flat Trail, a 5 mile loop trail. What beautiful white sand, it is so fine you could slide down the dunes, and finer than beach sand. The whiteness of the sand in contrast to the brilliant blue sky looked surreal as we walked along the trail. Then we did the Dune Life Nature Trail, dotted with interpretive exhibits on plants and wildlife that live here. On the way back we stopped in at the White Sands Missile Range Museum and Trinity Site, the place where the first atomic bomb was tested in 1945, but we didn’t have ID to get inside the compound. When we returned to Las Cruces we stopped for a beer and a bite to eat at the Spotted Dog Brewery. Click on thumbnail to view images END_OF_DOCUMENT_TOKEN_TO_BE_REPLACED 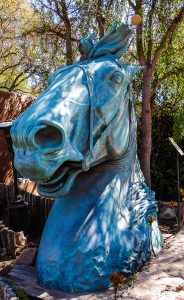 We finally arrived in Santa Fe a day later than we had planned because of RV repairs in Tucson. We are staying at the Trailer Ranch RV Resort only 4 miles from downtown Santa Fe. After settling into our site we drove into Santa Fe and went for dinner at the Blue Corn Café. We walked the streets and gazed at all the beautiful art pieces in the windows and on the sidewalks. The next day we drove to Canyon Road which is an entire street dedicated to galleries and art shops. We had breakfast at The Teahouse, sitting outside under the trees, enjoying the best oatmeal I have ever eaten, (and I’ve eaten a lot of oatmeal). We walked up and down Canyon Street exploring all the unique shops with different art sculptures and paintings, and Décor for homes. Click on thumbnail to view images END_OF_DOCUMENT_TOKEN_TO_BE_REPLACED

On Monday Oct 28th thetime finally came to say a sad farewell to Pat and Harry Koehler who have been our faithful companions for 4 weeks. We are heading south to Tucson, AZ, and they are heading north, home to Calgary, Alberta, before the snow arrives. So it’s back on the road again after a much needed rest for 3 days in Golden. The drive to Santa Fe, New Mexico, took us about 7 hours of flat terrain and big sky country with beautiful cloud formations. We stayed at the KOA Campground, very clean and not very crowded. We decided to take a trip into Santa Fe for the evening, but it was too late for a lot of the shops to be open. So we had a Mexican dinner at the Shed Restaurant in downtown Santa Fe. END_OF_DOCUMENT_TOKEN_TO_BE_REPLACED