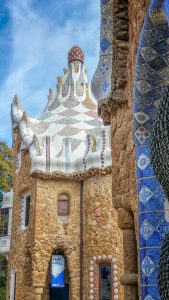 Antoni Gaudi and his unique approach to the Art Nouveau Movement generated some of the most creative buildings you will see in Barcelona, they are unmistakable. We were fascinated by his work and wanted to experience as many as possible. The first we saw was the Casa Mila, La Pedrera, one of Gaudi’s main residential buildings and one of the most imaginative houses in the history of architect. Constructed between 1906-1912 for Pere Mila, an important Barcelona businessman. It was named La Pedrera, or stone quarry, due to its rocky outside appearance. We took the day tour and signed up for the night light show the same day. The house has nine levels, the basement was a garage for cars, ground floor for commercial, the mezzanine for offices, the first floor the owners’ home, the four upper floors for rent and the loft and attic for the laundry. We visited the upper floors and the rooftop, from which standout amazing chimneys, ventilators and stairway exits of almost sculptural proportions. In the evening we came back to the rooftop for a fabulous light show, see the video below. END_OF_DOCUMENT_TOKEN_TO_BE_REPLACED 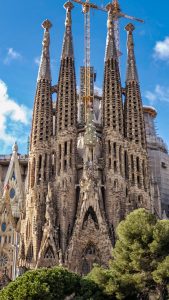 The Sagrada Familia is the most visited monumental site in Spain, over 3 million visitors per year, and our bus tour of 34 people with a guide was a small impact on the number of people already there. The challenge of making a half-completed building the most visited monument in a country, could only be achieved by a great, unigue architect, one of those that emerge only very rarely, one like Antoni Gaudi. On March 19,1882, the first stone was laid by the architect, Francecs de Paula del Villar, who submitted his resignation shortly after over a disagreement with the director. In November 1883, Gaudi began work on the Sagrada Familia, combining Gothic and Art Nouveau forms, and continued until his death on June 10,1926 after an accident, when only a quarter of the basilica was completed. This year it has reached its final stage of construction, and 2026 as its estimated completion date,100 years after the death of Gaudi, (1852-1926). END_OF_DOCUMENT_TOKEN_TO_BE_REPLACED

Our first visit to Barcelona, Spain, after our ski trip to Chamonix, France, was such an amazing cultural and architecturally mind-blowing experience. We stayed in a beautiful hotel in the center of the city with easy walking distance to all the sights. The first day we joined the ski group on a bus tour of Barcelona. After seeing the famous Sagrada Familia Basilica (described in a separate post) we drove up to the Parc de Montjuic for great views overlooking the city and the harbor. The park itself was nice to walk around as it offers a lovely green space in the heart of Barcelona. Then we walked the bustling central promenade, La Rambla, a tree-lined pedestrian mall for 1.2 kilometers. It is lined with cafes, shops, market, and breathtaking medieval architecture everywhere. END_OF_DOCUMENT_TOKEN_TO_BE_REPLACED