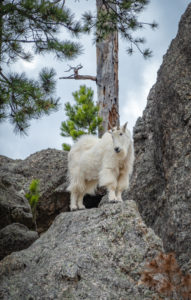 On our way to South Dakota from Colorado our GPS in the RV took us on a dirt road for 16 miles, where we did not see another vehicle, and don’t know why it took us this route. It was terrible for both the RV and the Jeep’s hood were blasted with rocks. Finally we arrived at the KOA in Hot Springs, thankful to be there after the worst drive ever!! Hot Springs does have warm springs which were considered sacred by the Native Americans. The city of Hot Springs developed in the 1880s as a resort community, with visitors drawn to the restorative and curative  properties of its mineral springs. One can visit the hot springs today at the Evans Plunge built in 1890, with its naturally warm 87 degree spring water. We walked through the historic city center taking many photos of the beautiful wall murals and many unique sandstone buildings. Hot Springs is also home of a US Department of Veterans Affairs Hospital, designated a National Historic Landmark in 2011 for its architecture and history. We walked up the hill to view the hospital, formerly known as the Battle Mountain Sanitarium, the 100-bed center was built in 1907 to treat former soldiers suffering from rheumatism or tuberculosis, believed to be treatable by the region’s mineral springs and the thin dry air. END_OF_DOCUMENT_TOKEN_TO_BE_REPLACED

Our drive home took us through Custer State Park, a wildlife reserve, it encompasses 71,000 acres of spectacular terrain and an abundance of wildlife including 1500 free roaming bison. We were lucky today to see a herd of these buffalo crossing the road. END_OF_DOCUMENT_TOKEN_TO_BE_REPLACED

Friday, August 15th, we drove south to Hot Springs and the Black Hills Wild Horse Sanctuary, which covers 11,000 acres of land and has over 500 rescued mustangs running free. We arrived just in time for the 11:00, 2-hour tour to experience the horses up close. The Institute of Range and American Mustang (IRAM) founded by Dayton O Hyde in 1988 is a non-profit organization registered in the state of South Dakota. Over 25 years ago Dayton left his ranch in Oregon and headed off to find a place in the West where there was land enough and grass enough to set-up a wild horse sanctuary so that the unadoptable horses could run wild and free. The Bureau of Land Management (BLM) round up and capture the wild horses with helicopters because their numbers on the range have exceeded their food supply and place them in holding facilities. These horses are born to be wild and are meant to be free. Dayton wanted to help the horses to escape. END_OF_DOCUMENT_TOKEN_TO_BE_REPLACED

All Aboard the 1880 TRAIN!!!
Thursday, August 14th, Happy Birthday Bob! Today Bob wanted to ride the 1880 Train, powered by steam, the 2-hour, 20 mile round trip from Hill City to Keystone winds through the Black Hills National Forest. Hill City, the western terminus and headquarters of the 1880 Train, began in 1875 as a placer mining camp. The town boomed in the 1880s as the headquarters for the tin mining company and again in the 1930s with the CCC camps. Now tourism has kept Hill City busy in the summer. In the summer of 1957 the sound of a steam locomotive whistle returned to the central Black Hills of South Dakota, known as the 1880 TRAIN. We arrived early to watch the steam engine filling with water as the Conductor made sure everything was in top form. When it left the Station the steam engine started up the 4 to 6 percent grade and climbed to the top of Tin Mill Hill where we could see ruins of the Good Luck Mine, which flourished during both World Wars. Looking across Palmer Gulch we could see Harney Peak, at 7,242 feet, the highest point between the Rocky Mountains and the Alps. We arrived in Keystone and spent time exploring the town. END_OF_DOCUMENT_TOKEN_TO_BE_REPLACED

Wednesday, Aug. 13th, we headed out to see the Badlands of South Dakota. We stopped at Wall to visit the Wall Drug Store, the #1 roadside attraction in America with a frontier town, 26 retail departments, arcade, animated T-Rex, gem panning and lots more. It was too much to take in all at once so we continued on to the Badlands. END_OF_DOCUMENT_TOKEN_TO_BE_REPLACED

Saturday, Aug 9th, we drove into Rapid City to explore the town. We did the downtown walking tour of the Presidents. Bronze statues of our nations Presidents line the street corners of downtown Rapid City. Each depicts a president in different poses, emphasizing some unique aspect of their personality. Bob’s favorite was President Reagan wearing a cowboy hat. The Presidents are life-size, the book is full of fun facts mixed with traditional history. END_OF_DOCUMENT_TOKEN_TO_BE_REPLACED

Monday, August 3rd, on our way to Rapid City, South Dakota, to get the Sherpa registered in our new home state. Unfortunately we are arriving the same week as the Sturgis Rally when almost 500,000 motorcyclists will move into Stugis and the surrounding area. We are staying for a week at the Americas Campground and Lodging in Box Elder, and we were very lucky to get in here. There is so much to see here in the Black Hills and our first stop is to visit Mount Rushmore National Memorial. END_OF_DOCUMENT_TOKEN_TO_BE_REPLACED