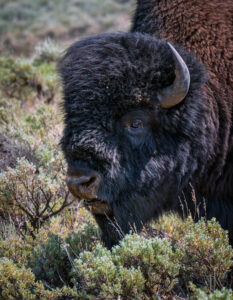 Today we drove the Chief Joseph Scenic Byway, Highway 296, a 45-mile-long state highway that follows the route taken by Chief Joseph as he led the Nez Perce Indians out of Yellowstone NP and into Montana in 1877 during their attempt to flee the US Cavalry and escape into Canada. Click on thumbnail to view images END_OF_DOCUMENT_TOKEN_TO_BE_REPLACED 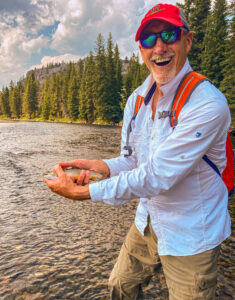 On Saturday, July 17th, we left Pinedale and drove to Cody, WY, staying at the Cody Trout Camp RV Park until July 22. Cody is one of the West’s great places. It’s surrounded on four sides by mountains, rich in wildlife and a place filled with adventure. We visited the Buffalo Bill Center of the West with 5 museums, including the Buffalo Bill Museum, tracing William F Cody’s life (1846-1917) with multimedia displays, and the Draper Natural History Museum with wildlife exhibits. We spent hours exploring the museum and the fascinating displays. Buffalo Bill Cody was a US Army scout, bison hunter, Pony Express rider, Indian fighter and showman. Click on thumbnail to view images END_OF_DOCUMENT_TOKEN_TO_BE_REPLACED 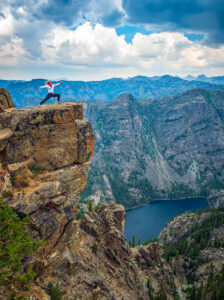 On Monday, July 12th, after the Green River Rendezvous was over we moved the RV to the Yellowstone Trail RV Park in Pinedale, WY, a brand new park. We stayed until Saturday for 5 nights enjoying Pinedale and the scenic Wyoming area. We hiked the Sacred Rim Trail, a 4 mile out-and-back trail on the edges of the Bridger Wilderness near Pinedale. We drove the Skyline Scenic Drive with breathtaking views of the Wind River Range at 9,000 feet, to Ekhart Park. We started on the Pole Creek Trail for a few 100 yards until we found the cairn where the trail branched off to the Sacred Rim Trail to the left. At the end of the trail we were rewarded with absolutely incredible views, and you feel like you’re on top of the world. We looked down at Long Lake and looked out across the Wind River Range in the Bridger Wilderness… such a large space untouched by humanity. Sacred Rim is an appropriate name for this short, quiet trail as it is a part of heaven on Earth. Click on thumbnail to view images END_OF_DOCUMENT_TOKEN_TO_BE_REPLACED 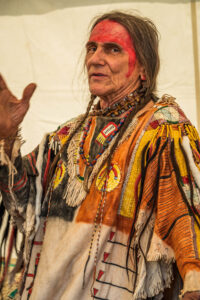 On July 6th, 2021, we drove to Thane, Wyoming, where we stayed for 2 nights on our way to Marbleton, Wyoming to Rob’s Roost RV Park for 5 days. We couldn’t get into a park near Pinedale because of the Green River Rendezvous Festival was happening, July 8-11, and we wanted to experience the Mountain Men. So we stayed in a cabin at the Highline Trail RV Park for the weekend to be closer to Pinedale. The Green River Rendezvous is held each year and it relives the early Mountain Men history of the area. During the Rendezvous, the town of Pinedale comes alive with activities and events surrounding the Mountain Men theme. The Green River Rendezvous was an annual event in the 1830s. Mountain Men, Trappers, Travelers, and Indians all gathered in a valley “below the Green” river and bartered, traded, sold and swapped various items such as skins, pelts, guns, jewelry and whatever else they needed. END_OF_DOCUMENT_TOKEN_TO_BE_REPLACED 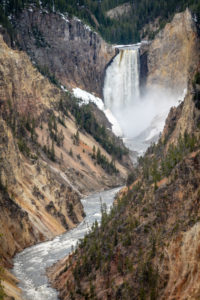 On May 15th, 2019, we drove to the Yellowstone’s Edge RV Park, 35 miles north of the North Entrance to Yellowstone National Park. It’s a beautiful RV park located on the Yellowstone River and our site was on the banks of the river. Every morning driving to Yellowstone we would stop at the Wild Flour Bakery & Cafe in Emigrant, in the heart of Paradise Valley, for a delicious breakfast of Prebird Scramble or Hipster Toasts. On our first day into the Park we stopped at the Roosevelt Arch, a “rusticated triumphal arch” at the north entrance; to take photos of this magnificent stone archway without crowds of people. Construction of the arch began on February 19, 1903, and was completed on August 15, 1903, as President Theodore Roosevelt laid down the cornerstone. The top of the arch is inscribed with a quote which reads:

“For the Benefit and Enjoyment of the People” END_OF_DOCUMENT_TOKEN_TO_BE_REPLACED 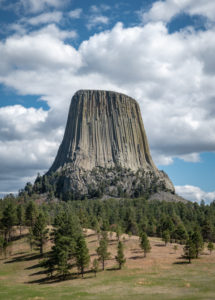 The Devils Tower National Monument was our next adventure, only one hour drive from the Elkhorn Ridge RV Resort in Spearfish, SD. The Devils Tower also known as Bear Lodge Butte, by the Native Americans, located in the Black Hills of Wyoming. It rises 1,267 feet above the Belle Fourche River, and stands 867 feet from summit to base, the summit is 5,112 feet above sea level. Quite an impressive monolith. Devils Tower was the first US national monument, established on September 24, 1906, by President Theodore Roosevelt. The name Devil’s Tower originated in 1875 by Colonel Richard Dodge, and the Native American names include “Bear’s House” or Bear’s Lodge”,”Tree Rock”, “Aloft on a Rock” and some others. There are many theories as to how Devils Tower was formed, the latest theory suggested that it is a volcanic plug, or the neck of an extinct volcano. The first known ascent of Devils Tower occurred on July 4, 1893, by William Rogers and Willard Ripley. They built a ladder of wooden pegs driven into cracks in the rock face, a few of these pegs are still intact and are visible from the Tower Trail. We hiked along the 1.3 mile trail discovering the many shades of the rock columns, and watching the climbers ascending the rock. The Tower is sacred to several Plains tribes, and therefore the climbers agreed not to climb during the month of June when the tribes are conducting ceremonies around the monument. It was a beautiful day exploring Devils Tower and the land around it. Click on thumbnail to view images END_OF_DOCUMENT_TOKEN_TO_BE_REPLACED

We went into Jackson Hole to get backcountry permits for our backpacking trip into Grand Teton National Park. We had to go to the Jenny Lake Visitor Center in Moose, WY, just outside of Jackson. The Ranger was very helpful and suggested some great trips for us to go on, but we could not go above 9,500 ft because of the deep snow on the trail. Therefore, we could not do a loop, so we decided to go into Death Canyon for 2 nights and come back to our car and drive to the trailhead for Leigh Lake and Paintbrush Canyon and go in for 2 more nights. What a great idea because we only have to carry enough food for 2 days and leave the other 2 days of food in the car when we get back there. The weather looks great for the total 5 days that we will be out. Armed with 2 cans of bear spray we set out for our backpacking trip. END_OF_DOCUMENT_TOKEN_TO_BE_REPLACED

Today we decided to go for a bike ride along the most scenic bike trail we have ever ridden. We left Victor early and on our way to Jackson we spotted a moose right beside the road. They are as prolific as deer are in Ohio. We arrived at the Visitor Center in Moose where we parked the jeep and started our bike ride on the 8-mile long multi-use bike trail through the magnificent Grand Teton National Park that opened in 2008. We had spectacular views of the Tetons all the way to Jenny Lake. We continued to ride to Leigh Lake along the road and came back to Jenny Lake to catch the boat to Inspiration Point. Beautiful glacially-carved Jenny Lake is the second largest lake in the Grand Tetons, and the deepest at 423 feet. END_OF_DOCUMENT_TOKEN_TO_BE_REPLACED 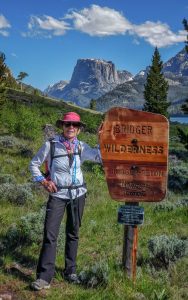 We went to the Green River Lakes area to do some backpacking as it was one of the few places in the Wind River Range that offered a lot of hiking options below the snow line.  This is where we started our Wind River backpacking adventure yars ago in the pouring rain so it will be nice to see what the area looks like in good weather. The first nite we decided to camp in the main campground and hike around the lower lake to get our bearings.  The weather was great and after getting settled in we started hiking down the south side of the lower lake. There was still a lot of trees down across the trail so progress was slow, but the views were breathtaking.  At the east end of the lake we crossed the Green River and headed up to the upper lake and views of Square Top Mountain. We found an awesome place to camp for the next 2 days then returned to the campground along the north side of the lake for a nice dinner, great campfire and a good nights sleep.  Click on thumbnail to view images END_OF_DOCUMENT_TOKEN_TO_BE_REPLACED

After spending a few relaxing days in Heber City, where Bob bought a new camera in SLC. We sent the old camera in for warranty repair and we will get it back in 4 weeks. Good idea to buy the warranty! Then it was off to Pinedale WY to backpack in the Wind River Range. We are staying at the Highline Trail RV Park just south of Pinedale near Boulder. Again we found out that we are too early to hike into the Titcomb Basin because of the snow level. We visited the Museum of the Mountain Man in Pinedale, that exhibits western historical pieces relating to the mountain men who explored this region in the early to middle part of the 19th century. Including Jim Bridger’s rifle from 1853, exhibits of the Rocky Mountain Fur Trade between 1820 and 1840, Native American Heritage featuring clothing, tools, and weapons used by the Plains Indian tribes, and one of the highlights of the Museum is the full-scale replica of American Horse’s tipi. Bob even got to feel like a Mountain Man wearing one of their fur coats. I really think he should have lived back then as he loves reading all about their journey into the Wild West. We also visited the Boulder Lake Lodge, located NE of the tiny town of Boulder. It is surrounded by sage brush flats and willow lined snow melt creeks. Here you can stay and rent horses to pack into the Wind River Range and go Glamping for a couple weeks. We definitely want to return here and go backpacking with the horses. Click on thumbnail to view images END_OF_DOCUMENT_TOKEN_TO_BE_REPLACED